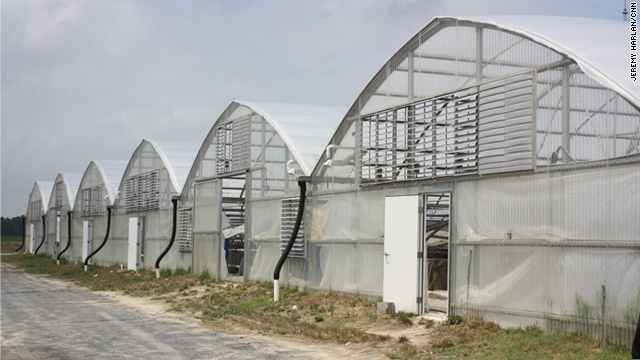 CAMBRIDGE, Md. — Packed into a conference room at the Cambridge Airport on a Saturday, nearly 40 people gathered on March 23 to learn more about Marvesta Shrimp Farms and to consider the possibility of becoming shrimp farmers themselves. “If the money’s there, it’s something different to get into,” said Josh Harding, a farmer from Rhodesdale, Md., who is considering aquaculture to diversify his operation and came to the meeting for more information.

Guy Furman, owner of Marvesta, talked to prospective growers about how committed he is to providing fresh, environmentally friendly and healthy shrimp on a consistent basis. He said his company does not use artificial hormones, antibiotics, or chemicals. “We are competing against frozen imports,” Furman said. “But we’re selling to a premium market and we shoot for something reliable and consistent.” Potential growers learned that Marvesta has been able to use a zero-exchange indoor system, which is the “cheapest and best water reuse system on the market,” Furman said.

The water in the system is recycled and only needs additional water to replace evaporation losses. While chicken growers, current and past, with existing poultry house were targeted as potential shrimp growers, there were several others who were outside of the poultry industry who attended. The initial investment to become a Marvesta grower is $50,000. It includes one year of consulting, 12 tanks and equipment, and the first six months of feed, shrimp and supplies. Grants are available to help with startup costs, Furman said. A 24-tank system is $80,000, and additional 12 tanks are available for $25,000, but will not include consulting and supplies. Furman said he is confident about the commercial grow out process because he has seen excellent results from another shrimp company in Indiana, RDM Aquaculture, LLC and its owners Darryl and Karlanea Brown will act as consultants for Marvesta growers. “We are with you all the way,” said Karlanea Brown. “You fail, we fail. That’s not an option.”

Brown will train growers on how to maintain proper water quality and how to grow the bacteria needed for shrimp to flourish. The couple, who transitioned from hogs to shrimp, have helped others do the same. They live 600 miles from the nearest saltwater and have six nursery tanks and 14 grow out tanks.

They also have greenhouses and 500 acres in corn and soybeans. Using the zero exchange aerobic heterotrophic system, “our water is three years old,” she said. According to Furman, the typical survival rate for shrimp is 80 percent but the Browns’ have well over a 90 percent survival rate. The Browns raise their shrimp in 12-foot round tanks “similar to a swimming pool,” said Brown. Shrimp do jump when stressed so they need a cover and require the equivalent of sun and moonlight, said Brown, adding that they live in 85-degree water. “You need to dedicate about two and a half hours to them a day,” Brown said. “Everything you’re getting here is something we’ve been working on,” said Furman.

Growers will have to test the water daily and corrective measures can be taken by altering the feed.  “If you don’t water test you could lose a tank in four days,” said Brown. Growers will have the shrimp for four months, stocking three tanks at a time.  Like poultry, the system will be set up with a pressure monitoring alarm in case of fluctuations in the tanks. Attendees asked specific questions about site requirements, permitting, and sustainability. Some wondered if the heat from the water would take a toll on the buildings. “We ventilate our buildings year round,” said Brown. “We control condensation with a small vent fan.”

Participants were also concerned about the cost of feed and testing supplies. Furman said he buys the feed in bulk and that “our goal is to make money buying the shrimp not on the other stuff.” With such interest, a few attendees worried that the shrimp market would become saturated. Furman said he does not think there will be a flood of product to the market. Furman told the crowd that in the United States, shrimp is the second largest natural resource imported after oil. “Marvesta is a brand that has never had a problem,” he said. “It’s a premium product. Long term, we’ll make you aware of what products will be cheaper — feed, equipment — we’ll stick with you.” Calvin Musser, of Laurel, Del., who had tried aquaculture with another company but was not satisfied, said, “I’m very interested, I’m ready to do it again.”
Furman said the return-on-investment is about three and a half years. Furman has visited a several potential farms and some of the growers have expressed interest in doubling the number of tanks.

Our guaranteethe freshest shrimpon the market